The wind rattles the bothy door and pushes hopefully against the windows, the frames flex under the pressure of the gale but I know they’ll hold and relax with my tea. There’s nothing quite like a cup of tea in a bothy, the taste is transformed into some kind of heavenly nectar. Bearnais bothy is a long walk from anywhere, in places the path from Achintee is difficult to follow as it winds its way in an odd diagonal before it crosses the high ridge to descend into the broad silent glen. I savour a mouthful of the hot tea, rubbing my aching legs, and then, glancing down through the stem rising from the dark liquid I notice something floating on the surface, it’s a mouse turd.

I sit for a moment, staring at this unwanted visitor to my beverage, hoping it will magically transform into something a little more welcome, a seed perhaps, a fragment of biscuit but no, it stares back at me and is, unmistakeably, mouse crap. I fish it out and I’m then faced with a dilemma, what to do with the tea. I was enjoying it a moment ago, positively revelling the taste, but now it appears slightly less appetising. Option one is to throw the tea away and start again, option two is to man up and finish the tea and pretend nothing has happened, after all it will taste just as good as it did before. 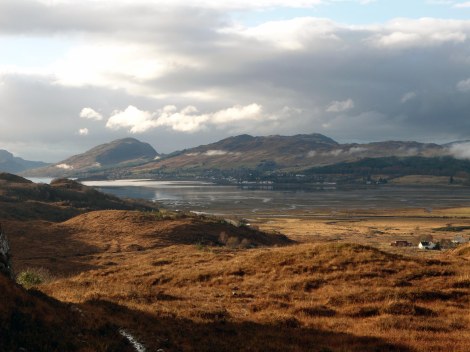 Thinking about it logically I’m sure, in all my bothy ramblings, I must have consumed a fair bit of mouse crap in the past and I appear to be in robust health most of the time. Indeed there are certain foodstuffs that even today have permitted levels of mouse crap in them. Rice is one of them. If a waiter were to ask you, “How much mouse droppings would you like to take with your curry today sir?” it’s hard to think just how much might be acceptable. Perhaps, however, we have become a little too squeamish in relation to our or association with our rodent brethren. In Medieval times people must have lived in homes infested with the little souls and, as a result of the lack of dishwashers, eaten rather a lot of the stuff. Our obsession with living in sterile environments is relatively modern notion.

Looking around this little Highland bothy I realise it wouldn’t be too hard to imagine that I’ve travelled back to the dark ages. There is no electricity, no Internet, no TV, the bathroom is literally a bog outside serviced by a shovel. The lights are candles and the only heating is the logs I carried in over the hill. Basically this is what it was like in about 1535. In those days I doubt if your average peasant would have even paused at the sight of a floating mouse turd in his mead and most of them were fine, apart from those who died of horrible diseases of course.

So drinking mouse soiled tea is hardly likely to kill me is it? There are things I wouldn’t do though. I read recently that a man had to have a tape worm removed from his brain. Apparently it got into his head after he was treated by some Chinese apothecary using raw frog. I’m not sure what he was being treated for but if the cure is having a tape worm in your brain it must have been pretty nasty. The symptoms were headache and memory loss, “Sorry I used to be an engineer but this worm just scoffed that bit of my brain.” 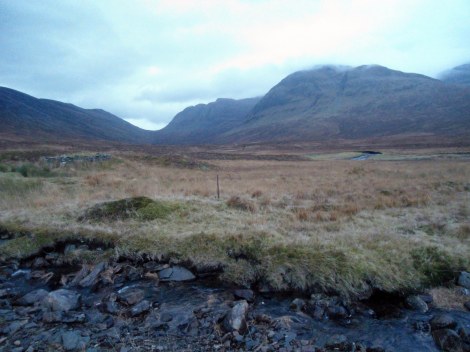 Wandering out of the bothy the following day I felt no ill effects although hopefully that’s not because the worm in my brain has affected my judgement, who knows perhaps it’s controlling me as I write now. On the journey out of the glen the weather suddenly closed in. The weather in that particular glen can change faster than anywhere else I can think of. I don’t normally write about gear but my new Paramo Cascada trousers performed so well I thought they deserved a mention. I hate over trousers, they are hot, restrictive and the work of the devil, I’d rather get wet than wear them. These Paramo trousers are waterproof but definitely not over trousers. You wear them all the time and they are incredibly comfortable and versatile, I found I had to keep reminding myself that I was wearing them at all. They also have the benefit of being generously cut so, once I arrive at the bothy I can put a pair of thermal PJ trousers, I got for a fiver from Aldi, under them and I’m warm as toast. A brilliant piece of kit, I definitely recommend them.

There are of course a breed of Aberdonian bothy visitors who are men of in a different league, they have true grit. They think nothing to walking in to a bothy with a bag of coal under each arm and a beer barrel balanced on their head. I can imagine them reading this account and shaking their heads in disbelief, “Wit, wit? He fished it oot! Ah cannea ken wha’s the wrang wi the man is he some kind aw Jessie?”

I’ll translate: “What? He removed the mouse faeces from his tea! I don’t understand what’s wrong with the man, does e have some sort of genetic weakness?”

5 responses to “Are you a real man”