As soon as I said it, I felt the atmosphere change. It had been warm and cosy in the little Bothy, and the mood convivial but when I spoke those words it was as if a mysterious stranger had kicked open the wooden door and let in the freezing night.

‘I hear this place burnt down a few years ago. How could some fool burn down a Bothy?’ It was a simple question, asked more to pass the time than from any real curiosity. The woman opposite me was feathering wood for the fire, the blade of her knife glinted in the candle light. She froze when I asked the question. She was tall and dark, her features even an sharp. I remember thinking she had the dark haired beauty Irish women sometimes had. Her companion was older than her thirty years or so, thin with a grizzled beard.

He caught my eye and shook his head. ‘I don’t think there’s any need to ask about things like that.’ For a few moments we all sat in silence staring into the flames of the fire. Then the woman began carving again and we all watched how the steel blade cut deep into the wood.

‘It’s a fair question,’ she murmured, more to herself than to us two men. Then she looked me in the eye and I felt my blood run cold, ‘How does some fool burn down a Bothy?’

The bearded man put up his hand to silence her but she pushed him away. ‘That’s a good question, maybe it deserves an answer.’ She paused and we waited as she struggled to find the words. ‘It might have been a candle left unguarded, or perhaps a log from the fire or a gas stove knocked over, it could have been any of those things.’ She tossed the stick she had been working on into the fire, the bright flames devoured it greedily bringing a burst of light to the Bothy. ‘But it wasn’t any of those things.’

I could see now how she struggled to contain her emotions, how something deep and dark within her tortured her mind. There were tears in her eyes and I wanted to return the demon I had released to the cage she held it in. ‘Please,. I don’t need to know.’

She looked down at the knife in her hand and then quickly back at me and the anger in her eyes startled me. ‘Have you ever been in love?’ She demanded, ‘I mean really in love, consumed by it. So you can’t eat, you can’t sleep, so all you think about, day and night is them.’ She fell silent again and I could see that she travelled to some distant place in her mind.

‘We were in love, Davy and me, and happy together. One day he told me he was coming to this Bothy for a night of peace and quiet. It was a dark November night, the wind rising and hurling the fallen leaves up into the dark night sky as I walked up the glen. I wanted to surprise him you see. I had a bottle of wine, some bread, a bit of cheese. You know.’

I did know. Simple pleasures in a simple place, good company, peace in a place with the one you loved. The picture was already in my mind.

‘I could see the candle light in the window ,’ she said, her voice quivering. ‘And I pressed my face against the window. I remember the glass, cold.’ She fell silent again, we waited silently, knowing that the tale she was telling could not be stopped. ‘They were in here together, Mary, worked in the post office. Nice girl. They were cuddling together in front of the fire, laughing. They stopped laughing when I walked in.’ She turned, picked up her cup and gulped down her whisky. Then she looked around the room as though she was trying to re live what happened. ‘I can’t remember what happened then. I shouted, I know that, and I remember him touching me and me pushing him away.’ Her companion refilled her cup in silence and she drank again.

‘Then I was alone. They ran. I don’t blame them,’ she laughed and for a moment seemed younger than her years. ‘All that happened here. Fire cleanses. I thought that it might stop it hurting and I was angry. A few matches, a little paraffin. You could see the flames from the road they said.’ That fact seemed to make her proud.

‘Don’t be,’ she grinned, her eyes shinning in the candle light. ‘He pissed off with with a hiker from Glasgow, left Mary with a baby, the wee shite. I was better off without him. Besides we rebuilt the place. Not bad for is it.’ She cast her eyes around the Bothy, admiring the neatly jointed wood work. 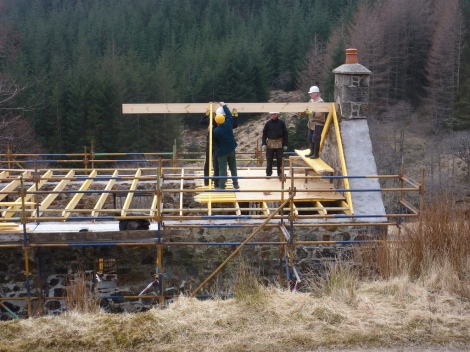 ‘I came back a few months later to see the scene of the crime. The place was all charred wood. Black and heartless, like me, so I thought I’d rebuild it. Took time and a lot of help but we got the roof on, then the windows in and slowly it came back, became whole again. And as I pit it back to how it had been it put me back together as well.’

She sat back in her chair and relaxed, perhaps telling the tale had exercised a ghost for her. She smiled, ‘So now you know…I’m the woman who burned down Gleann Dubh-Lighe Bothy.

All images in this post were taken from the internet, mostly Mountain Bothy Association sources.

See me at KENDAL Mountain Festival 18th November in my one man play George Mallory: Beyond Everest

2 responses to “The night the Bothy burned”